New to PYNQ so bear with me please! I have previously scrapped working with the Canny accelerated function and have dived into the Sobel (You may have seen my previous post).

I got the Sobel accelerated function working. I am using example code from the main branch of Vitis libraries to build the functions into IPs. I modified the config to suit for grayscale input image (8UC1, NPPC1. I import it into vivado and create a block design with automatic connections:

In Jupyter Notebooks I get the correct output it seems to be working, here are Gx and Gy: 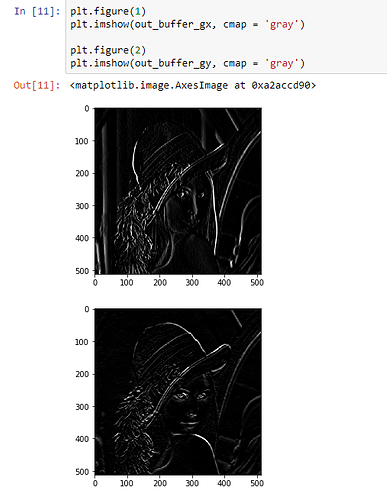 Now, I wanted to add Gaussian Blur accelerated function to the block design as well. The grayscale image is to be processed through this function first and then the Sobel. I create a separate Vitis project for the Gaussian Blur, same branch for vitis libraries. I modify the config for grayscale (8UC1, NPPC1 and export it out into an IP block. I now import it into my Vivado project block design like so with automatic connections:

Now as soon as I run any two of the accelerated functions, gaussian doesn’t work at all a blank plot. Or if I first run only the Sobel function on its own on this overlay, it is a weird output and not the same as before. It is like as soon as I add the gaussian block into the block design it interferes with how the Sobel operates. This is the output I get now: 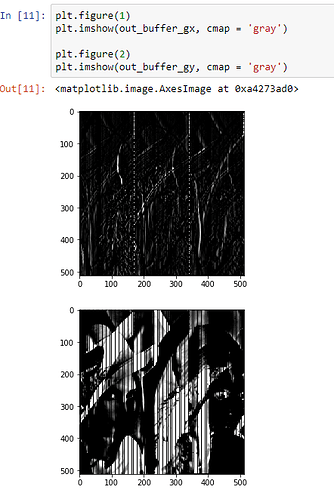 I have also tried hooking it up like this in Vivado for further testing and still got the weird outputs:

I thought maybe separating them with interconnects it would work, but it didn’t.

Some assistance on how the block design should be designed would help a lot. I’m not sure why the Sobel function stops working simply because of adding the gaussian block. I am also using separate buffers for both functions so that isn’t an issue.