Rebuilding the PYNQ base overlay

The base overlay for the PYNQ-Z1 and PYNQ-Z2 boards allows peripherals to be used out-of-the-box with PYNQ. The overlay includes IP for controlling HDMI, Audio, GPIO (LEDs, buttons and switches) and slave processors for controlling Pmod, Arduino, and RaspberryPi peripherals. It is not necessary to build the overlay, as the compiled design is already preloaded in the PYNQ image. However, recreating the Vivado design will allow you to explore the base design and modify it for your own use. For example, you may want to remove all but the Video IP, and add your own custom filters, or keep the IOPs and add additional logic to your design.

This tutorial will show how to rebuild the PYNQ base overlay for the PYNQ-Z1/PYNQ-Z2 boards. This tutorial uses Vivado 2020.1 and code from the PYNQ v2.6 release.

Start by cloning the PYNQ GitHub repository. (Or you can fork it to your own repository and clone your fork.)

If you don’t want to use git, you can download a Zip file of the repository from GitHub: 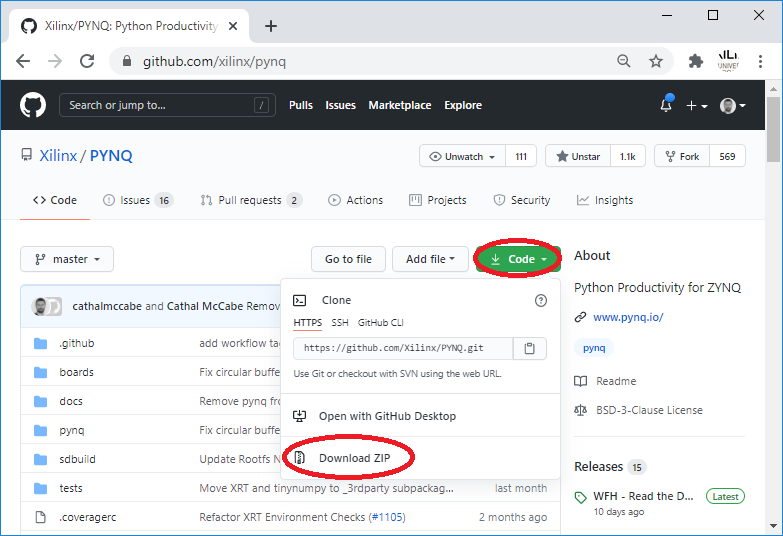 This tutorial will use the files in the boards folder.

PYNQ provides direct support for three main boards, PYNQ-Z1, PYNQ-Z2, ZCU104. In the boards directory, you will see a corresponding directory for each board, along with an ip directory and a sw_repo directory.

The Xilinx Vivado software contains a library of IP that can be used for building new designs. The PYNQ ip directory contains additional custom IP that isn’t available in the main Vivado IP library. For example, the IP for the HDMI controllers for the PYNQ-Z1 and PYNQ-Z2 can be found in the ip directory.

The sw_repo directory contains software source code related to overlays. For example, PYNQ can use MicroBlaze soft processors in the fabric. Source code for MicroBlaze applications is specific to overlays, and is included here, rather than in the main pynq Python directory at the top level of this repository.

This tutorial will concentrate on the base overlay for the PYNQ-Z2 board. The base overlays for other boards can be rebuilt in a similar way.

Rebuild the base design

A Makefile is provided that can be used to rebuild the base overlay on Linux by running make all in the base directory. Make sure you have sourced the correct version of VIvado before running make.

The base overlay is built from IP in the Vivado catalog, and IP in the ip directory. Some of the PYNQ IP is based on HDL code and other IP is provided as HLS source code (notice the hls directory). 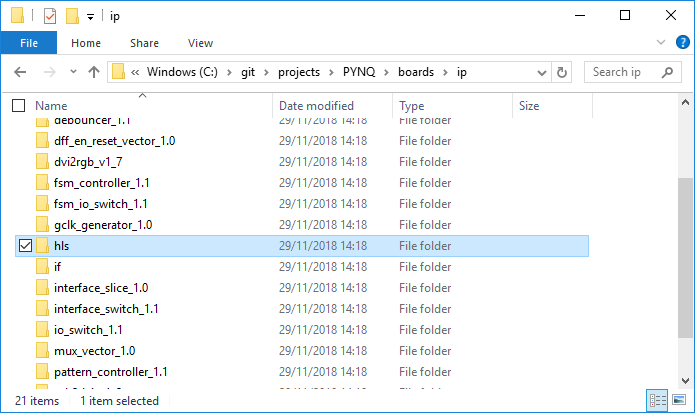 Before HLS IP can be used in a Vivado design, the base design in this case, the HLS IP must be built. If it is useful, you can reuse any of the PYNQ IP for your own designs. 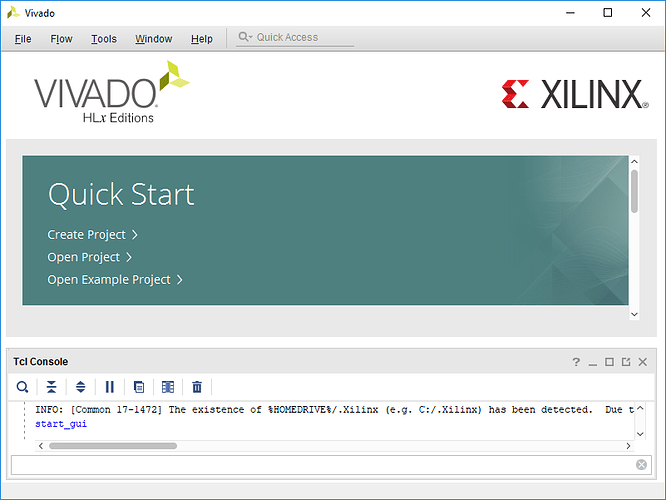 A build_ip.tcl TCL script is provided to rebuild the HLS IP required for this design. (./boards/Pynq-Z1/base/build_ip.tcl)

This script will only build IP in the ip/hls directory that is required for the base overlay. It also checks if the IP has already been build and skips any IP that is built or not required… This means if you need to use the IP in another design, or want to rebuild the base overlay later, the IP won’t be recompiled, saving some time.

To run the Tcl files, enter the following commands in the Vivado Tcl console:

The base.tcl file (./pynq/boards/Pynq-Z2/base/base.tcl) will be used to create a new Vivado project, generate the base overlay design. In a change from previous versions of PYNQ, the Vivado design is created, but the bitstream will not be generated during this step. This allows you to review or study the design. It isn’t necessary to generate the bitstream for the base design, as it is already provided precompiled in the PYNQ image. You can make changes to the base design and then build the bitstream. 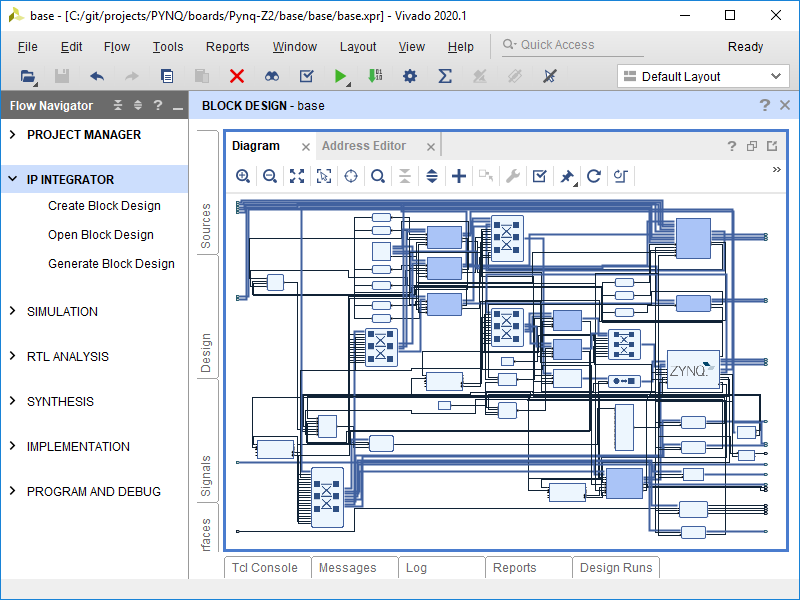 The base overlay bitstream is already installed in the PYNQ image for the PYNQ-Z1, PYNQ-Z2 and ZCU104 boards, so you don’t need to rebuild it. If you *really* want to rebuild it, you can click the Generate Bitstream button in the Vivado GUI. The build_bitstream.tcl Tcl file (./pynq/boards/Pynq-Z2/base/build_bitstream.tcl) can also be used to generate the bitstream if you want to continue using scripts. Note that this process can time some time (~30-60 minutes) depending on the specification of the computer you are building the design on. There are also some Vivado settings you can change to speed this up if you only want to build this design once. By default the design has out-of-context switched. The first build will take longer, but if you make iterative modifications to the design rebuilding should be faster.

The check_timing.tcl Tcl file (./pynq/boards/Pynq-Z2/base/check_timing.tcl) can be used to check your design meets timing. If you are familar with Vivado, you can open your project and analyze the timing and the rest of your implementation in Vivado. .

If you chose not to generate the bitstream using the Tcl file, you can generate it later in Vivado by clicking on the Generate Bitstream button. You can also analyze timing in Vivado, and the rest of your implementation.

IP-XACT - an XML format for IP that defines and describes individual blocks. Xilinx IP in Vivado is based on this format. IP-XACT makes it easier to use IP to create new designs.

Do you know what could be causing this?

Hello there, me again. Changing the version in the .tcl files to the version of Vivado I am currently using seeimingly fixed the problem with the error message I was getting. However I am now seeing a new error after running the
source ./base.tcl
command

what do I need to do to stop this error from occurring?

I was also wondering if having access to the pattern generator and boolena generator in Vivado would allow for more pins to be used to create patterns.

Hello everyone. is it possible to open the 2020.1 tcl script with 2020.2 vivado software? I am unable to find a base overlay version with a tcl script version any higher than 2020.1. is there a repo some where that has up to date versions int?

It should be straightforward to update the script. However, PYNQ 2.6 has only been tested with Vivado 2020.1 so you should try stick to this version if you can. You may be able to build the hardware with a different version of Vivado and then find other problems when you try to run the design.

Thanks for replying so quickly.

You can use the branch image_v2.7

Python Productivity for ZYNQ. Contribute to Xilinx/PYNQ development by creating an account on GitHub.

Be aware that this branch has not been fully verified.

I will use with caution

I just tried building the image_v2.7 branch, as I can’t install Vivado 2020.1 on my Ubuntu 20.04 installation. I have installed Vivado 2020.2, and when executing source ./build_ip.tcl I’m getting the following error:

Any idea what I could do?

Edit: Managed to get the ip to build, I was missing two packages: build-essential and libc6-dev-i386.

However, when running base.tcl, I now get the following error:

I think I got it working. It seems the error is related to language specific issues.
Changing my Region Format to English (US) as well as setting the following before running vivado seems to have made it work:

A post was split to a new topic: Problem rebuilding base v2.6

A post was split to a new topic: Rebuilding the base overlay